On November 10, 2019, Mr. Michael Mesa, President, and CEO of Mesa Science Associates (MSA), announced the presentation of a non-clinical study regarding Nasal Administration of Epinephrine. The results were presented by Kenneth Dretchen Ph.D., CSO and Principle Investigator at MSA. The study was presented in a poster at the American College of Allergy, Asthma, and Immunology (ACAAI) annual conference in Houston, Texas on November 10, 2019. The poster entitled, “Intranasal Effects on Pharmacokinetics and Heart Rate in a Nasal Congestion Canine Model” is the first in a series of publications to be presented by MSA that detail the results of non-clinical studies conducted to support the concept of Nasal Administration of Epinephrine for patients suffering from a severe allergic reaction, commonly known as anaphylaxis. MSA and MRI Global of Kansas City, MO. collaborated on the study which was funded by Bryn Pharma LLC. The study was conducted to determine the ability of epinephrine to be absorbed through the nasal mucosa and to determine blood levels and pharmacokinetic values when the drug is applied nasally to dogs that have nasal congestion. The nasal congestion was induced by continuous exposure to histamine throughout the test period. This study has shown that even with nasal congestion present the nasal route of administration of epinephrine in canines produce even higher plasma levels of the drug as compared to the intramuscular route of administration.

The current therapy to treat an anaphylactic event is the administration of epinephrine by intramuscular injection via an auto-injector. While this treatment has shown to be effective, problems with auto-injectors include patient concerns about needles that can lead to avoidance, delayed therapy, or even injury at the injection site. Bryn Pharma, a North Carolina based company, is developing a new cost-effective two-dose nasally administered therapy that has the potential to mitigate most of the issues with autoinjector administration. The device is a small compact unit that is needle-free and easy to carry in pockets or purses. MSA is under contract to support the Bryn effort through commercial launch.

Mesa Science Associates is a pharmaceutical product development company located inside the Frederick Innovation and Technology Center Inc. (FITCI) in Frederick MD. The goal of the company is to provide technical and scientific expertise to researchers from all aspects of the drug, drug delivery and product development community, including researchers from the government, academia, and private entities. 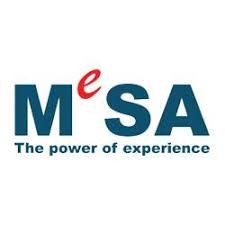