Mr. Michael Mesa, President and CEO, Mesa Science Associates Inc. (MSA) announced today that MSA will have an important role at the annual National Institutes of Health (NIH) Counter Act Investigators meeting to be held June 18-20, 2019 at the World Trade Center in New York City. The NIH Counter Act group was established to encourage pharmaceutical and bio-pharmaceutical investigators from industry and academia to develop new and improved medical countermeasures against existing and emerging chemical and biological threats to the U.S. Homeland.

MSA is attending the Counter Act meeting for the 7th year and will have an expanded role at the 2019 event. The event will be hosted by the New York Academy of Science with MSA joining with Rutgers University as a co-sponsor. The MSA team will also be in attendance in support of Counter Act Investigator, Dr. Gerry Boss, from the University of California, San Diego. The MSA team has supported Dr. Boss for each of the past seven years as he has worked towards development of an important countermeasure against chemical agents.

MSA associate, Matthew Robben PhD, will give a talk about the importance of managing formulation development during the discovery and development stages of a pharmaceutical products life cycle. Dr Robben holds a Ph.D. in Pharmaceutical Sciences and serves as a Chemistry, Manufacturing and Controls expert on MSA consulting teams. Joining Mr. Mesa and Dr. Robben at the New York meeting will be MSA Chief Science Officer, Kenneth Dretchen, Ph.D. and MSA Research Assistant, Zachary Mesa.

MSA is a pharmaceutical product development consulting company that provides services to investigators in industry, government and academia. The company is located at the Frederick Innovation and Technology Center in Frederick MD. 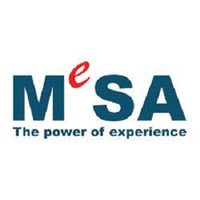