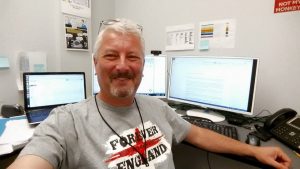 Karl Hindle is an “accidental immigrant” originally from Manchester, England, who has always been something of an athletic nerd. Being good at sports led him first to the army, followed by college and an early career in accounting. His natural ebullience had him pivot to a career in sales, and when the early days of the Internet arrived, he was quickly hooked—and self-taught– on digital. He hasn’t looked back since.

Wellspring Search, a full-service digital marketing agency and lead generation machine, is Karl’s manifestation of building his own dream.  Started two years ago in his hot tub room, Wellspring has grown rapidly and been profitable right out of the gate. Growth has been generated organically and through acquisitions of other digital marketing agencies.

Wellspring Search’s value proposition is based on a deep knowledge of how search engines work. According to Karl, Wellspring is a process driven outfit for companies that need world-class search engine optimization systems and processes. The company’s approach is from the digital side.  If creative marketers or other experts are needed, the Wellspring brings them into the mix.

Karl moved the company out of the hot tub room and into FITCI to gain access to the people and resources that distinguish the Frederick incubator. Having lived in a few places along the East Coast previously, he moved Wellspring Search to Frederick County because of its growing reputation and robust economy.

This entry was posted in Uncategorized. Bookmark the permalink.